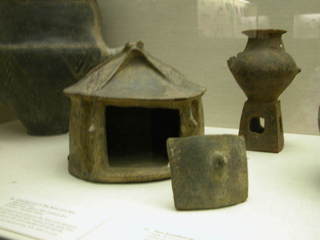 
So deep in the earth,
below layers of ash, of tufa,
you might never find me,
but for the tumulus:

That huge mound of earth
—girded by stones,
on a stone base—
mimics my roof.

Open my door. In the gable
peer through the smokehole. Inside
I am dark as the artificial cave
you entered searching for me.

The house is the body I tell you.
I am the house of fired clay.
I hold the ashes of the woman
who lived in a hut of daubed clay.

The tombs plough their way underground,
below that perishable earthen roof.
The stone mouth narrows,
recedes, disintegrates.
Out of reach
I hold myself whole.

For signed copies of the 1983 edition contact the author.

Mummy of a young woman (with wrappings removed)
standing in a glass case and held upright by an iron rod.
Another glass case contains the mummy’s bandages which
are completely covered with writing in an unknown and
hitherto undeciphered language . . .

What did you take me for, Michael
Baric, that day in Alexandria
in eighteen hundred forty-eight?
Did you expect to be taken? Palmed off
with a bundle of sticks, rubbish,
sawdust, cats’ skeletons, stuffed by human
hand into a non-human skin
in the back street of a Cairo bazaar?
Even my case is real. You set
it on end in your salon, telling
the credulous ladies it held
the sister of King Stephen
of Hungary! You never looked
inside. Later, you died, left me
to your brother, Elias, pastor
in some godforsaken Slavonian
village. He reviled me, packed me off
to Agram, where they dishoused, stripped
and catalogued me: “an outstanding
treasure of the National Museum.”

The iron rod eats into what little
flesh I have left. And I’m cold.
Cold comfort my words, unstrung
In a case nearby.

And the linguists who came to visit
not me, but my wrappings: Herr Doktor
Heinrich Brugsch, and that beastly
Sir Richard Burton! Narren, fools,
I say, thinking my words, my letters,
“partly Greco-European and
partly Runic,” or Arabic
translation from the Book of the Dead.

More than one man of the cloth has laid
hands on me. The museum director,
the abbé Ljubic removed my bandages
to his study, but not before he’d
dispensed great lengths of them to his
congregation. Scattering the gods
whose wills they could not read. And here
I shrivel, my toes curl, my chin –
sharp as a knife – cuts my sternum.

What nonsense I have heard these many
years through the transparent walls
of this rigid case! Even a man of
instinct, Jacob Krall, could not take
my words at face value, took them
first to Vienna, suspecting the ink,
the linen of forgery. When he was
sure – my words are Etruscan –
I was cross-examined:
– Is she Egyptian?
– Why bury a book with a girl?
– Is she Etruscan?
– Why wind the strips so that the writing touches her flesh?

They photographed my words under
infrared light, made transcriptions,
exposed them to questioning eyes.
Trying to trace my words through tangled
roots, who sought to render them
fell into deepest night. One heard cries
rising from the cloth. Another saw
sacrifice to a vulture god. I danced
before them: a witch, a troll, or served
my ancestors an insubstantial meal.


Have they considered that without me
The text has no meaning? Our language
was reserved: we spoke only among
ourselves. Is this why they parted us:
afraid I would take every sign
away from them? The bitumen that
seeped through my skin and into the cloth
transformed the words. They entered my flesh,
became whole inside me. Black ink on
white cloth: opaque remains. The meanings
lie in the lacunae.